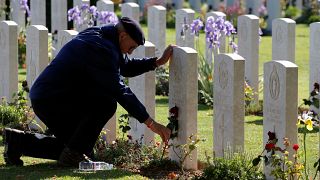 Veterans share their heartbreaking memories of the D-Day landings

Veterans of the D-Day landings have shared their heartbreaking memories of what was the largest seaborne invasion in history.

Today, ceremonies take place to mark the 75th anniversary of the event, which marked the beginning of the end of World War II.

Euronews has compiled some of the most touching testimonies of those who took part in the invasion on June 6, 1944.

"On the boat, I got dead and I got wounded and I got live soldiers and they're crying 'momma, momma, momma'. You know everybody thinks you cry to God. When you're dying, you cry momma," said Frank DeVita.

"I reached down and I touched his hand. Because I wanted him to know he wasn't alone. He squeezed my hand as if to say 'it's all right' and he died. He was just a little boy, just a little boy and he was dead," he added.

Steve Milnikoff, who served with the 175th Infantry Regiment recalled seeing his colleagues gunned down.

”A memory that I'll never forget for the rest of my life as I went down. I looked towards the side and I could see my Lieutenant Fields, he's been hit by the same automatic fire standing there and just taking all these hits. When the machine gun stopped firing, he just hit the ground, he was gone."

The US 101st Airborne Division was one of the most active units in the entire Normandy campaign.

Eugene Deibler said: "If you weren't scared, something was wrong with you because hell, you're just a kid."

A small number of French marines participated in the operations under the banner of the Free French forces.

"The orders, we had, were to run as quickly as possible towards the top of the beach where the bunkers were because the closer we were to the bunkers, the less danger we were in," said Leon Gautier, 96.

"And when we arrived near the walls of the bunkers, we threw grenades through the holes."

Thousands of Germans were killed in the storming of the beaches, and thousands more lived to tell their tales, with a different perspective of the operation,

Paul Golz was just a teenage private in the Germany army when the allied forces arrived.

"I thought as a young soldier, this mass of soldiers was working," he said. "They landed. And the war was lost for us. Hitler should stop now. That went through my head. And then, at the end, I saw what he sacrificed there."

Now one of the famed Chelsea pensioners, 96-year-old George Skipper, who also served in the Desert Rats, often questions the sacrifices of the day.