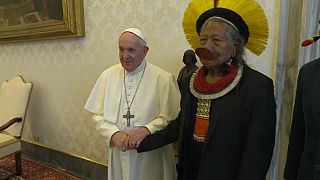 Wearing his traditional lip plate and a yellow, crown-like decoration on his head, Amazon rainforest chief Raoni Metuktire on Monday met with Pope Francis at the Vatican.

The old Kayapo chief is in Europe to raise awareness and support for the protection of his Brazilian people's reserve.

Chief Raoni gave the pope a large photograph of the Amazon forest, pointing him to where exactly his reserve is located.

The Holy See press office director explained how the pope intended to use the meeting to stress his attention for the Amazon's people and environment safeguard.

It comes in view of the Special Assembly of the Synod of Bishops for the Pan-Amazon region, which will be held in October.