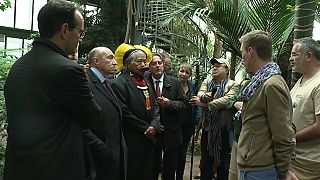 Indigenous leader Raoni has been in Lyon, France, since Monday, as part of a world tour to warn about the preservation of the Amazonian forest.

After meeting Pope François on Monday, Raoni arrived in Lyon at the end of the day, where he was presented with the City of Lyon medal by Mayor Gérard Collomb.

The tribal chief was then welcomed this Tuesday morning at Tête d'Or Park for a visit to the botanical garden.

This site is home to 13,000 botanical species, 1,000 of which are considered threatened.