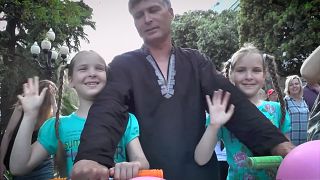 Double vision? 50 pairs of twins gather for parade in Crimea

Twin brothers and sisters marched with their parents along the embankment of Yalta on the Black Sea in Crimea on Sunday (May 26) as part of the Festival of the Crimean Twins.

The parade was held in the city for the second time and gathered around 50 pairs of twins, most of them young children from one to 10 years old, organisers said.

Most of the twins were dressed in the same costumes to emphasise their similarity.