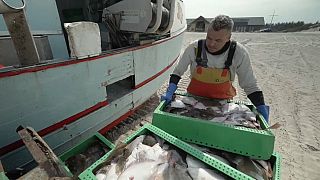 Traditional fishermen in the Danish village of Thorupstrand are pushing back against large-scale fishing operations that they say are threatening their livelihood and through that, their way of life.

Thorupstrand survived as a fishing village by sharing individual fishing rights between all the fishermen there, in a jointly-managed local cooperative — an example that researchers say can be followed by small-scale fisheries in other regions of Europe too.

Mathile Højrup Autzen, a social anthropologist at the Centre for Sustainable Life Modes, said it took a lot of effort and coordination: “They had a lot of meetings and discussions and the majority of them decided to try to establish a cooperative, to try to buy quotas up together and hold them in common.”

These preserved traditional fisheries — or artisanal fisheries — like Thorupstrand are playing a crucial role in many EU other regions. In the Mediterranean and the Black Sea, they represent over 80% of the total fishing fleet. They employ over 60% of the total workforce within the sector.

By protecting their artisanal trade, the community in Thorupstand safeguarded its traditional wooden boat-making, which is famous in Denmark and abroad.

European funding helped to open a boatyard there, which creates fishing vessels and also trains new craftspeople, which in turn reinforces the local economy.

Thorupstrand has even managed to expand its sales to the heart of Copenhagen, the Danish capital. It sells fresh fish on a converted boat moored in the city.

Furthermore, the small-scale fishing at places like Thorupstrand doesn’t damage the marine environment in the way that big, industrial trawlers can. This makes their produce even more attractive to consumers that are only interested in sustainable local food.

“This can mean the sustainability of the environment, but also sustainability for the small fishing villages which on the Danish coastline have otherwise almost died out completely.

"I hope that they will survive — I’m pretty sure they will, and in the best case maybe they can inspire similar towns to keep up the good work.”