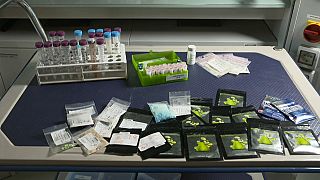 So-called “designer drugs” can be fatal - but most of them are still legal and available in e-shops. Their expansion is causing a serious headache to customs agencies and lawmakers across Europe.

Scientists are now racing against the clock to fight the fast-moving new drug market. At the Joint Research Centre in Ispra, northern Italy, scientists receive samples from EU member states' customs, whose routine checks were unsuccessful.

“In general, customs officials rely on data libraries to identify drugs. But for these new drugs, which have just been synthesised, often there is absolutely no data. So we have to start from scratch and we need specialised labs like ours to identify these new structures," Claude Guillou, head of the Narcotics Laboratory at JRC said.

Thanks to their instruments, the researchers can unveil the molecule and communicate it to the customs network. Their aim is to create a synthetic drugs “encyclopedia”. The EU has so far registered more than 750 of these new drugs.

Authorities might decide to ban a substance - but new ones always pop up.

"The production of psychoactive chemicals is progressing at incredible speed,” Fabiano Reniero, a chemist at Joint Research Centre in Ispra said. “We estimate that two new psychoactive substances are created every week. We must be able to identify them very quickly."

The scientific work gets more concrete in Geel, Belgium, where another lab of JRC is based, working in close collaboration with the Ispra scientists.

They developed applications for portable instruments, which carry all the data collected so far.They allow customs to safely identify, if a substance belongs to the three main drug families, including fentanyl, the most dangerous of all.

"In this way, when a customs officer does not have in his instrument the spectrum that matches with the substance, he knows that he must treat it with great caution because it's potentially mortal," Ana Boix, Analytical Chemist, Joint Research Centre in Geel told Euronews.