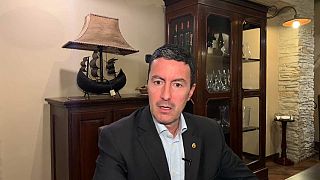 European Politics has many political dynasties, with families spanning generations, but one of the most controversial family names is re-emerging in the European Union elections.

Caio Mussolini, great-grandson former Italian dictator Benito, admits that he hopes his name will help him.

He is standing in the elections in Taranto in southern Italy.

His presence to make a speech there on Tuesday provoked an anti-Fascist demonstration, but when Mussolini arrived at the venue, he dismissed them:

“Sadly the left still lives in the past and it has no suggestions.

"The things that they propose are not what the people need."

Speaking at a seafood restaurant, around fifty people turned up to listen.

Mussolini says he doesn’t consider himself to be a fascist. He says he wants to be judged on his abilities rather than his surname, but admits he is trying to use this identity:

"I need to get known in a very short time and the only way is to let people know me and maybe take advantage of my surname."

But he may face an uphill battle; last Thursday, 25th April, the annual Liberation Day celebrations to mark the end of Nazi occupation on that date in 1945 attracted a larger number of people than usual.

Nevertheless, while the larger numbers attracted to the demonstration are very much opposed to the politics of the past, Federigo Argentieri, Professor of Political Science at John Cabot University in Rome says some Italians still have an ambiguous relationship with fascism:

"It's because of a certain legacy of nostalgia, people saying things like fascism was not too bad after all, Mussolini did a few good things, all these legends are still floating around."