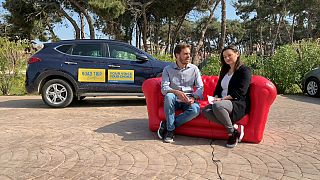 Our Road Trip has been working its way across the continent ahead of the EU parliamentary elections, asking people from across Europe which issues will be their priority as they head to the polls, and has spent the last week in Greece.

Our correspondents Bryan Carter and Fay Doulgkeri found that most voters in Greece are focused on domestic issues rather than European ones.

The team concluded that the Greek voters they spoke to feel the European Union is 'too remote', especially in the wake of the financial crisis that they have endured.

The team also uncovered a sense that, although the official bailout period is over, the strict financial controls still being imposed on the Greek people do not give a sense that they have as yet entered a new era.