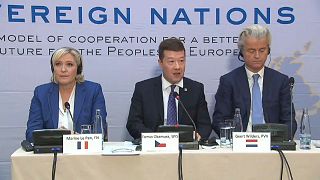 Europe's far-right leaders put on a display of unity ahead of EU elections as they opened a joint nationalist rally in Prague on Thursday.

"What is happening before your eyes is the emergence of a new European harmony which sees the nationalist parties united to offer to 500 million of Europeans a new framework of cooperation, a new project, a new impetus," French far-right leader Marine Le Pen said in her opening remarks.

The Europe of Nations and Freedom parliamentary group has ambitions to form the largest single group in the European Parliament after next month's elections.

Czexit supporter Tomio Okamura is hosting the summit. He is joined by Marine Le Pen from France and Geert Wilders from the Netherlands, while Italy’s Matteo Salvini is expected to send a video message of support.

In her opening statement, Le Pen said the European elections were not just about designating MEPs but a "fight for civilisation".

"It’s great to be here and be part of a patriotic group," Dutch far-right leader Geert Wilders said after emphasising the importance of national sovereignty, the fight against Islamisation and the need for Europe to end its open border policy.

Wilders called the EU "undemocratic" and claimed the bloc wanted to "to dismantle the identity of the nation-state".

Reporting from Prague for Good Morning Europe, journalist Luca Rovinalti said Okamura had been using social media to call on supporters to rally against immigration and “diktats” coming from the European Union.

Receive our regular newsletter directly to your smartphone