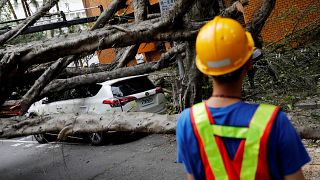 The bureau said the quake happened at one minute after 1 p.m. local time (0501 GMT). The depth was 10 kilometres (6 miles), according to the United States Geological Survey.

Videos filmed in a newsroom by staff of SET News showed office lights swaying and flickering.

The quake shook buildings in the capital, Taipei, which is about 115 kilometres (71 miles) away, with one multi-storey building reported to be leaning against its neighbour.

The city's subway system suspended service, while schools along the east coast were evacuated, with students holding their backpacks over their heads for protection.