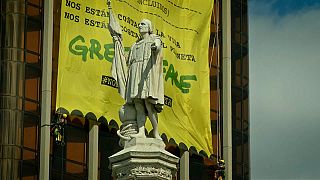 The members of Greenpeace deployed a large protest banner on a building in Madrid ahead of Spain's general election at the end of April.

The yellow flag represents an invoice that lists the impact political decisions are having on climate and human rights, according to the NGO.