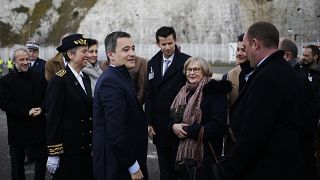 Customs officials in Calais are operating a 'go slow' in protest over what they claim is a lack of resources being allocated to manage their post-Brexit workload.

Long tailbacks are developing as the action enters its third day.

David-Olivier Caron, the Regional secretary of the CFDT Union, warned that the delays being caused by the action were a taste of things to come: "With Brexit, new missions will come. Checking an additional border is an entirely new domain. Everyone will have to declare, transporters, individuals, and if we don't have enough means, we risk having traffic jams even longer than today’s."

But as Anelise Borges told Good Morning Europe, the French Budget Minister Gerald Darmanin is playing down the fears:

"We are ready for this revolution at the borders,” he said. “There will not be any 'bottleneck of the century' in Calais. What we will do is to control the arrival of goods on European soil, and hence first on French soil. And we will work in an intelligent manner, with digital developments that allow targeting and pre-controls. Things will go smoothly come March and April."

Watch Anelise Borges's report in the video player above.