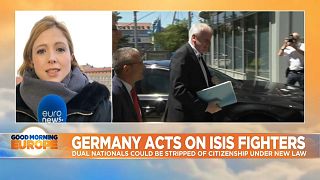 Germany is to introduce new legislation to remove citizenship from dual-nationals who fight for the self-styled Islamic State (IS) and other terrorist groups.

To date, German nationals could only have their citizenship stripped if they joined foreign armed forces without the government’s permission. Now the German government has decided to extend the legislation to cover German citizens who travel to fight on behalf of a terror militia.

But the proposed new law from Chancellor Angela Merkel’s government is attracting criticism from all sides. Some argue that it is too little too late: it will not be retroactively applied to Germans already in custody or in refugee camps in Syria.

And correspondent Jessica Saltz told Good Morning Europe that on the left politicians were accusing the government of shirking its responsibility. The Greens and Die Linke say Germany should deal with citizens who were brought up inside the country.

Watch Jessica Saltz's report in the video player above.