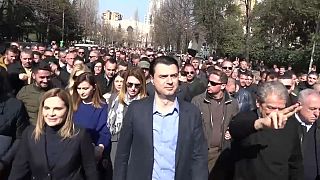 Thousands of Albanians took part in a rally in their capital city Tirana yesterday, demonstrating against alleged corruption by Prime Minister Edi Rama.

The peaceful demonstration culminated in a march led by opposition leader Lulzim Basha, to hand over signed statements by his MPs giving up their parliamentary seats and demanding fresh elections.

Prime Minister Edi Rama said the door was still open to Basha and his party.

He said: "The hand of co-operation and dialogue is still extended to the opposition, despite them excluding themselves from parliament.

"Political life continues, just as this government and its majority will continue to work for Albania, though it can't continue as if nothing has happened."

The European Union and United States condemned the mass resignations.

"The decision by the opposition to relinquish their mandates seriously hinders the functioning of democracy in Albania.

"These decisions and acts are counterproductive, go against the democratic choice of Albanian citizens and undermine the progress the country has made on the European Union path."

They urged the government and opposition to start "constructive discussions" to resolve the crisis.

But the leader of the main opposition Democrat party, Lulzim Basha, defended the move and showed little willingness for reconciliation during a speech at the rally.

"Today the country does not have a legitimate parliament. I will never accept an agreement with a bandit like Rama."

Ahead of the protest, the prime minister accused the opposition of "deliberately creating conflict" before local elections in June "because they do not have the means to face the citizens' votes".