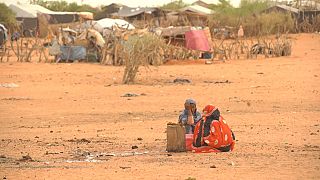 Thousands of people are arriving from neighbouring Mali to escape an extreme interpretation of Islam and inter-ethnic violence.

Mbera refugee camp in Mauritania represents one of the few possibilities for civilians fleeing the ongoing conflict in northern and central Mali.

The camp is located in the far South East of Mauritania, 60 kilometres away from the border.

Over the past six years, it has grown to host 55,000 refugees. Newcomers have decreased, but have never stopped. There were almost 6,000 arrivals during.

"We are simply not receiving the funds that we need. In UNHCR Mauritania we had 15 percent of the needs covered until 2018. WFP had 5 percent of their needs for the general food distribution of the month of December covered. Five per cent. That simply means we cannot feed the people who are here".

Watch Monica's full report in the player above