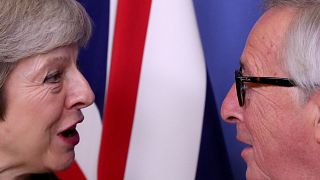 Theresa May heads to Brussels for Brexit talks with EU's Juncker

UK Prime Minister Theresa May is heading back to Brussels to reopen talks on Brexit, after the deal she agreed with the EU in November was rejected by her own government.

May is to meet with European Commission President Jean-Claude Juncker today in an attempt to renegotiate the controversial 'backstop' agreement over the Irish border.

She is expected to request legally-binding assurances that the backstop will not extend indefinitely after Brexit.

However, the EU has repeatedly stated in recent weeks that it is not open to making any more concessions to the UK - leaving the two sides in a deadlock.

Speaking ahead of the meeting, Juncker's said: "There is not enough movement for me to be able to assume that it will be a productive discussion."

The EC President also reiterated fears that Britain may end up leaving the EU without a deal in place.

He said: "An unregulated exit of Britain from the European Union would have devastating consequences for both economic areas, the domestic British one as well as the European."

Back in the UK, May is facing potential rebellion from members of her own party, and from the Democratic Ulster Unionist Party, which props up her minority government.

May and Juncker are expected to meet at the EU's headquarters in Brussels at 18.30 local time.