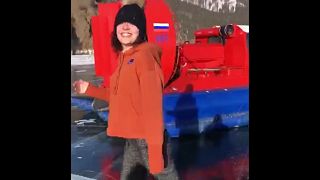 A frozen lake in Siberia was the perfect place for a Russian gold medalist to practice her figure skating.

Adelina Sotnikova performed a dance routine on the ice of Lake Baikal over the weekend, sharing the footage on social media.

Sotnikova announced last August that she would miss the 2018-2019 season due to injury.

The 22-year-old won a gold medal in figure skating at the 2014 Sochi Olympic Winter Games.

She also won silver in the 2012 Youth Olympics and is a two-time European silver medalist, a five-time medalist on the Grand Prix series and a four-time Russian national champion.