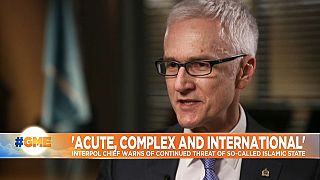 The head of the International Police Organisation, Interpol, has warned of the continued threat of the so-called Islamic State.

In an exclusive interview with NBC’s Keir Simmons, Secretary General, Jürgen Stock, said the danger posed by the terrorist group was still ‘immediate, complex and more international than ever’.

His comments come just weeks after US President Donald Trump, announced his troops’ withdrawal from Syria because, he said, the so-called Islamic State group had been defeated.

The move was met with criticism from both inside and outside of the United States. Many countries, especially those participating in the coalition fight against the group, have expressed concern. For them, the withdrawal of US state troops risks leaving a void which could once again become occupied by sympathisers of the terrorist group.

Interpol’s chief said concerns were still there and could be evidenced by the continued movement of hardened fighters to and from conflict zones:

He added: “Those for instance who are now trying or who already left the conflict zone in Syria, in Iraq, let’s say battled hardened, sometimes brutalised, definitely sometimes with the skills they need to build a bomb… and don’t forget foreign terrorist fighters from more than 100 countries who have been travelling into the conflict zones in Syria and Iraq.”

Stock said they are still a “huge and complex terrorist web,” despite having lost most of its territory.

“We have a database on foreign terrorist fighters,” he said. "We started that activity in 2012 just with 13 profiles, we have now over 50,000 profiles… potentially spread around the world."

Interpol will, asserted the Secretary General, continue to watch and identify militant fighters for as long as national governments allow it to.

His comments come ahead of a draft Pentagon report next week. A report due to outline that without continued surveillance and pressure, the militant set-up could regain territory within six to twelve months.