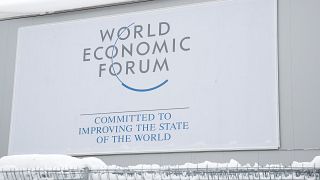 The second day of the World Economic Forum is under way in the Swiss mountain town of Davos.

The theme of this year's meeting is Globalization 4.0: Shaping a Global Architecture in the Age of the Fourth Industrial Revolution, with the circular economy very much linked to it.

The Ellen MacArthur Foundation is due to launch a report today which shows how artificial intelligence can help the transition into the circular economy.

“If you take today’s economy we dispose a lot of stuff, we throw it away, we create a lot of waste and that is very wasteful economically, but also from a materials perspective - a circular economy regenerates those materials,” Dame Ellen MacArthur, a former yachtswoman who has set up her own foundation looking at the concept of a circular economy, told Euronews’ Isabelle Kumar in Davos.

The sailor-turned-advocate launched the Ellen MacArthur Foundation in 2009, having become 'acutely aware of the finite nature of the resources our linear economy relies upon.’