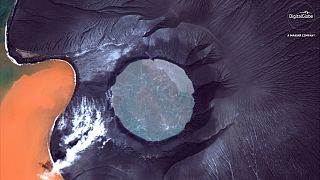 The Indonesian volcano which caused a tsunami that killed more than 400 people last week lost more than two-thirds of its height following the eruption which triggered the killer waves.

A section of Anak Krakatoa's crater collapsed after an eruption and slid into the ocean, generating the tsunami last Saturday night.

A visual analysis by the Indonesian volcanology agency found the volcano has lost more than two-thirds of its height, an official said on Saturday.

The agency estimated the volcano lost between 150 and 180 million cubic metres of material as massive amounts of rock and ash have been slowly sliding into the sea following a series of eruptions.