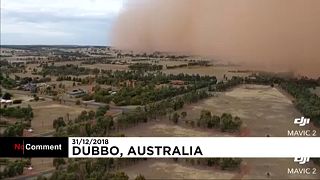 Bronwyn Alder, who filmed the footage, told Reuters she has not seen anything like it. The cloud of red dust arrived in Boona Mount at around 4:30pm local time (0530 GMT).

Australia's Bureau of Meteorology (BOM) had issued a severe weather warning for the area. Local media reported that a New Year's Eve fireworks was cancelled due to poor weather.