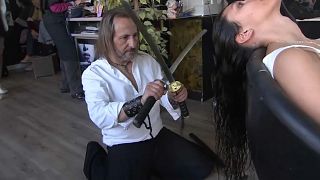 Short banzai and sides at a remarkable Madrid barbershop

Madrid-based coiffeur Alberto Olmedo may be one of the most unique hairdressers in the business.

He has refined a highly specialised technique of cutting hair, which includes the use of swords, metal 'claws', and flames.

And his clients are delighted with the results.

Olmedo has been cutting hair for 30 of his 54 years.

He became disillusioned with the traditional system of using scissors as he felt that it wasn't giving the hair the right vertical cut and the layers created were not what he was looking for.

A history buff, Olmedo began to study Renaissance paintings and asked himself how hair was cut in the past. He realized after further study that ancient barbers used daggers.

His busy salon opened in the working-class district of Campamento, on the outskirts of Madrid, 14 years ago, but it has been in the last 10 years that he has perfected the techniques of swords and flame.

He part-runs the business with his ex-wife.

In his arsenal of hair cutting weapons he has swords and katanas made in the renowned blade- making city of Toledo.

He also uses 12 inch-long, (30 centimetre-long), blades, shaped like the claws of Marvel superhero Wolverine, and shorter claws that he uses to quickly reduce volume.

Customers Laura and Judit are getting their hair done before New Year's Eve. For Laura this is her first time and she was more worried about how she would look than any potential injury.

Judit is a faithful customer of Olmedo's, and wouldn't trust her hair to anyone else. But Alberto is about to move into the 21st century. He says his next hair cutting technique will be with precision lasers.