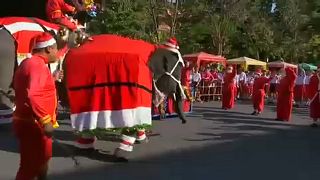 Watch: elephants dressed up as Santa interact with children

Santas in Thailand traded their reindeer for elephants on Monday (December 24) for an annual Christmas event at a school in northern Ayutthaya province.

The event is a yearly highlight for the students at Jirasartwitthaya School, which caters for children in kindergarten through to secondary school. They are not only treated to a number of gifts but also elephant dances.

Thailand is a predominantly Buddhist country with Christians comprising only about 0.7 percent of the population. Christmas is not an official holiday in the country but many commercial outlets and people have adopted various aspects of the tradition.