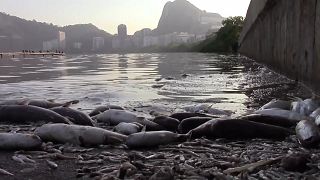 Brazil: Has the heat killed off thousands of fish in Rio?

Residents of a luxury neighbourhood in Rio de Janeiro awoke on Friday to the unpleasant odour of 13 tons of dead fish floating in the water of the Rodrigo de Freitas lagoon.

One of the city's picture postcard locations, the lagoon has suffered similar fish die-offs in previous years and biologists believe that extreme heat is the culprit.

Even before the first official day of summer this Friday, the temperatures in the city were soaring above 40 degrees Celsius (104 farenheit).

Biologist and ecosystem specialist Mario Moscatelli, inspected the lagoon and is convinced climate change is heating up the basin of the lagoon and lowering oxygen levels.

Scientists and environmentalists agree that the massive die-off occurs when there is a proliferation of cyanobacteria and phytoplankton that consume a large amount of oxygen and increases when temperatures soar.