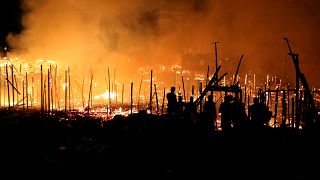 A huge fire blazed through 600 wooden homes built on stilts next to a river in Brazil's Amazon region overnight, decimating a poor area of the city of Manaus but causing no deaths, authorities said Tuesday.

The inferno started late on Monday and was only brought under control shortly after midnight after a three-hour struggle by more than 100 firefighters, the security secretariat for Amazonas state said.

The fire happened in Educandos, an impoverished and densely populated district near the centre of Manaus that sits on the Rio Negro, a river that joins up with the Amazon River to flow out to the Atlantic Ocean.

An initial investigation suggests a pressure cooker on a stove started the fire, which rapidly spread, fanned by strong gusts of wind at the time.