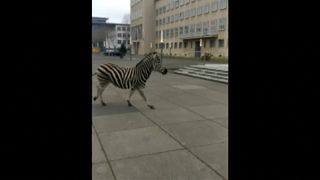 Zebra races through German city after escaping from circus

Four zebras escaped from a Christmas circus and were seen racing through Dresden, Germany on Monday (December 17) before being caught by police, German media reported.

Eric Kormann filmed one of the zebras galloping past him in the east German city before it was recaptured and returned to the circus.

Media reports detailed how the animals trotted past parliament and along the banks of the river Elbe during their escape. The police pursuit left one officer injured and one of the zebras later died from stress.

Buildings, houses and the destroyed 12th century Great Mosque of al-Nuri in the old west side of Iraq's northern city of Mosul are filmed by a drone.