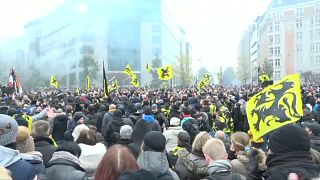 Protesters took to the streets of Brussels on Sunday to rally against a United Nations pact on migration, which is set to be approved later this week.

The Global Compact on Migration was adopted on Monday by 164 UN members and aims to improve the treatment of migrants worldwide.

The United States and a handful of European countries have rejected the pact.

Belgian police used water cannons and tear gas to disperse crowds near the European Commission, footage from the protest showed.

Critics claim the pact could limit individual countries' ability to shape their own migrant policies.