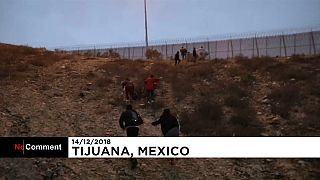 Migrants continue to enter the U.S. illegally rather than wait for asylum claims to be processed

A family including a young baby and toddlers climbed over a border fence in Tijuana on Friday successfully after a first failed attempt earlier in the day. Many such people are growing restless in shelters south of the border as they try to get their asylum claims to U.S. authorities.

Mexican officials have said as many as 1,000 individuals from the caravan of Central American migrants have hopped or otherwise skirted fences to reach the U.S. since they arrived at the border city of Tijuana.

U.S. President Donald Trump has sought to make it harder to get asylum, claiming criminals are amongst the migrant group. But a federal court last month placed a temporary restraining order on his policy that only permitted asylum claims made at official ports of entry.