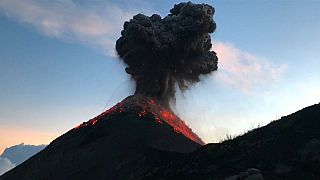 A group of hikers who ascended the Fuego volcano near Antigua, Guatemala, on November 24 2018, captured the moment they witnessed an unexpectedly large eruption at close range.

The eruption started just seconds before they began filming, according to the group, and they soon retreated to a safer spot.

"At no point did we fear for our lives, we had full trust in our guides," hiker Marc-André Pelletier told Reuters, describing the sight as "the craziest experience of my life".

Guatemala's National Disaster Reduction Agency CONRED later advised people to stay away from the volcano slopes, due to "explosive activity".

In June the Fuego volcano, which is one of the most active in Central America, produced a devastating eruption that killed more than 190 people.