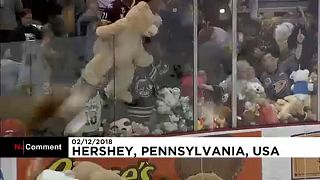 Ice Hockey player Riley Barber's first goal for the Hershey Bears on Sunday set off a world record teddy bear toss onto the ice of the Giant Center.

Barber's tally tied the game against the Binghamton Devils and caused the crowd to throw 34,798 stuffed animals onto the ice for charity. The Bears went onto defeat the Devils, 6-3.

The teddy bears and stuffed animals will be donated to nearly 30 local organisations including schools, food banks, churches, and the Children's Miracle Network and the American Cancer Society.

The toys surpassed the team's record toss of 25,017 last year, as well as the world record of 28,815 that was set by the Western Hockey League's Calgary Hitmen in 2015.