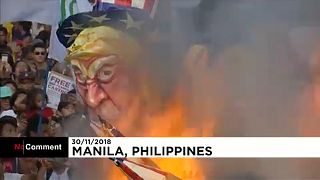 The activists marched to the U.S. embassy in Manila to protest Duterte's close relationship with the American leader and Beijing despite a territorial dispute over oil-rich islands in the South China Sea.

Protesters say the military and economic agreements between Manila and the two giants are lopsided and puts the Philippines in danger as the U.S. and China compete for influence in the region and are engaged in a trade war.

Duterte has earned Trump's praise last year for his "unbelievable job" in the country's war on drugs that has killed thousands and led a rapprochement with China's Xi setting aside its territorial claims in the South China Sea in exchange for billion dollar loans and grants.