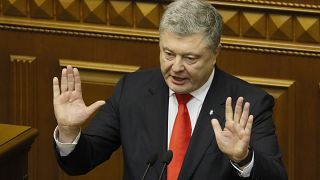 'Get out of Ukraine, Mr. Putin,' - watch Poroshenko interview

"Get out of Ukraine, Mr. Putin," Ukrainian president Petro Poroshenko said on Tuesday.

Poroshenko made the comments in an one-on-one interview with NBC News' Richard Engel, which was conducted two days after Russian forces created an international crisis by attacking and seizing three Ukrainian vessels that were trying to pass through the Kerch Strait, a narrow artery that connects the Black Sea to the Sea of Azov.

The clash has fired up both sides in an already difficult relationship. Martial law is in force in parts of Ukraine, three ships and 12 sailors are still being held by Russia. And Poroshenko is warning that this isn't over yet.

Watch the interview with President Poroshenko in the player above.