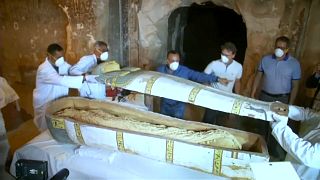 A previously unopened sarcophagus was opened for the first time on Saturday (November 24) as two Egyptian discoveries were unveiled in Luxor's west bank. The intact sarcophagus contained a well preserved mummy of a woman named Thuya and dates to the 18th Egyptian dynasty.

It was discovered earlier this month by a French led mission in the northern region of El-Assasif, along with another anthropoid sarcophagus which was opened and examined.

Earlier in the day a tomb belonging to Thaw Rakht If, the overseer of the mummification shrine, was unveiled along with 1000 small wooden and clay statues, and five coloured masks.

Three-hundred metres of rubble was removed over five months to uncover the tomb, which contains coloured wall scenes depicting the owner and his family. The tomb dates back to the middle-kingdom almost 4000 years ago, but was reused during the alte period.