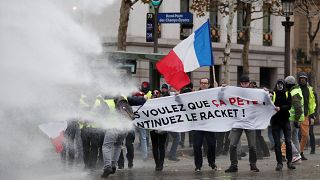 Police fired tear gas and used water cannon to disperse protesters in Paris on Saturday, (November 24), who are angry over rising fuel costs and President Emmanuel Macron's economic policies, the second weekend of "yellow vest" protests that have caused disruption across France.

Several hundred protesters converged on the Champs Elysees where they faced police sent to prevent them from reaching the nearby presidential Elysee Palace. Some protesters sang the national anthem while others carried signs with slogans saying "Macron, resignation" and "Macron, thief."

They are opposed to taxes Macron introduced last year on diesel and petrol which are designed to encourage people to shift to more environmentally friendly transport. Alongside the tax, the government has offered incentives to buy green or electric vehicles.

Some 3,000 police officers have been drafted in to work in Paris on Saturday, city hall said, with security forces having to handle a demonstration against sexual violence, a soccer match and a rugby game in the capital on the same day.