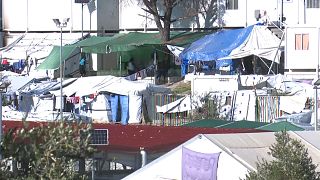 Moria refugee camp is infamous. It's a former military base on the Greek island of Lesbos, and now the country's largest refugee camp that houses about 8,000 migrants as they wait for their asylum claims to be processed, some waiting for at least two years.

The area has the capacity for 3,000 people, which means that the extra inhabitants are crammed in, making living space cramped and volatile. Just outside the camp walls, a makeshift sprawl named the "Olive Garden" has sprung up in a search for more space.

Mental health problems are rife, along with drug abuse and suicide attempts — rumours have circulated that a suicide attempt is the only way to be removed from the camp and sent to the mainland. Now, in Moria, winter is setting in with even more problems.

Temperatures are dropping and the number of rain days is doubling. Even a light shower can turn parts of the camp into mud pits and soak the ground underneath tents.

The Greek government was able to reduce the population of the camp by 2,000 after aid groups complained of a growing humanitarian crisis, but for the people left no end is yet in sight.

Click on the player below to see Euronews' Apostolos Staikos take us inside Moria.