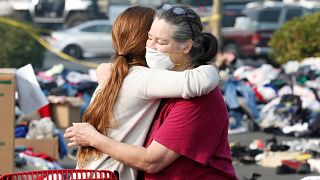 US President Donald Trump toured the burned out California town of Paradise on Saturday, surveying the smoking ruins of hundreds of homes

But it was his comments on forestry management that caused controversy, yet again. He's already drawn ire for tweeting that the California fires were solely the result of bad forestry policies in the state, upsetting some firefighters, officials, and victims of the disaster. Now, he's getting more of a bemused reaction, all the way from Finland.

"We are all committed, I'm committed to make sure that we get all of this cleaned out and protected," said the US President as he stood amongst the remains of Paradise.

"You gotta take care of the floors. You know the floors of the forest, it's very important. You look at other countries where they do it differently, and it's a whole different story. And to see what's happened here..."

"I was with the President of Finland and he said we have... What's different, we're forest nation, he called it a forest nation. And they spent a lot of time on raking and cleaning and doing things and they don't have any problem. And when it is, it's a very small problem. So I know everybody's looking at that, to that end. And it's going to work out, it's gonna work out well."

The Finnish President Sauli Niinisto did spend time with Donald Trump in France on November 11 when the two attended Armistice Day celebrations. They spoke about the raging California wildfires, but after hearing of Trump's comment, Niinisto tried to set the record straight in an interview with Ilta-Sanomat newspaper.

"I mentioned [to] him that Finland is a land covered by forests and we also have a good monitoring system and network," said Niinisto. What they did not discuss was raking, which is not used as a wildfire prevention technique in Finland.

"This is really more about managing the land. And Trump is right in saying that land management needs to change, not necessarily only forest management. It's basically the whole environment, particularly where houses are being built, where towns are, need to be managed in a better way. That means removing the fuel from close to the buildings, but that also means building in a way that houses are not so readily flammable."

Nearly a thousand still missing and 77 dead— Those are the grim numbers of the northern California fire called the Camp Fire. It's still burning, now over 60 per cent contained by firefighters, but it's what's left behind that residents now have to face.

Thousands are still displaced, and some have nothing to return to but ashes. Many are staying in makeshift camps, including one in a Walmart parking lot where the tent residents have been told to clear out.

Trina Reed drove from Oakland, California to hand out personal items to the people living in tents.

"People are incredibly grateful to see others reaching out in their time," she said. "And it makes you emotional to see these people with literally all they have in a tent and you give them something like toilet paper and it changes their day. And that's the reality of this situation. And this isn't the only shelter that`s like this unfortunately. I've seen this in a number of times and we just all have to help out in any way we can."