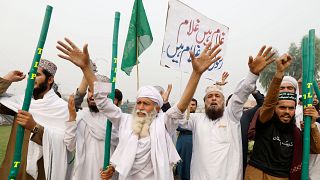 In Pakistan, even a hint of the word blasphemy can mean death— either by mob justice like lynchings, or in the courts where if convicted the punishment can be the death penalty.

Asia Bibi will no longer be facing a court-ordered execution. After living on death row since 2010, she's been acquitted of blasphemy charges by the Supreme Court of Pakistan. But the reaction to the Supreme Court decision has been fast, and fierce— hardliners are out protesting in the streets in most major cities. NBC correspondent Waj Khan was in Islamabad yesterday and charactarised the mood as "bracing for impact."

"Just on the time this judgement was coming through, the crackdown if that's what you want to call it on communication services was starting," he told Good Morning Europe on Thursday.

"We saw protests erupt all over the country... Major arteries and motorways were cut off as well. All of this unravelled within hours of the judgement yesterday morning."

The men in the streets were angry not only with Asia Bibi, but with the Supreme Court Justices who ruled there was not enough evidence to convict her of insulting the prophet Muhammed, and Prime Minister Imran Khan who has called for peace.

"[The protesters] are inciting you for their own political gain, you should not get trapped by them for the sake of the country, they are doing no service to Islam," Khan said in a televised broadcast.

"Well, he should go to the Supreme Court and submit a petition against this court order to discourage those who commit blasphemy."

Asia Bibi was taken into custody in 2010, following an argument she had with her neighbours over a water container. Allegedly, two Muslim women refused to touch the container after Bibi, saying that it was unclean because of her religion— Bibi is a member of Pakistan's Catholic minority. Later, a mob followed her to her home and beat her until her accusers say she confessed. A formal accusation was made at least five days later.

She was tried and initially sentenced to death and has remained on death row until this decision from the Supreme Court.

"I can't believe what I am hearing, will I go out now? Will they let me out, really?" she told AFP by phone after the news broke. Her location is a secret and her lawyer has expressed concern over her safety in Pakistan.

Though Asia Bibi walks free from prison, not everyone involved with her case has escaped violence. Two politicians who expressed support and sympathy for her were killed during the eight-year-long saga— one was Punjab governor Salman Taseer, who was shot with a machine gun by one of his own bodyguards in 2011. The man who killed him, Mumtaz Qadri, was executed, but in death he has many defenders who fiercely support upholding blasphemy laws. A shrine to Qadri is maintained in Islamabad.

Human right activists in Pakistan have called this decision a landmark moment.

"The Supreme Court of Pakistan has rendered such an excellent judgement, it is a landmark judgement, a milestone judgement," said Tahira Abdullah, a human rights activist. She says the Pakistani justice system is supposed to defend the life of Pakistani citizens, no matter their faith.

"The law enforcement agencies, the police is responsible for the protection of the life, the security, the property of Asia Bibi, her family, her friends, her supporters, the Christian community, human rights defenders, her lawyers and most especially the judges of the Supreme Court of Pakistan."