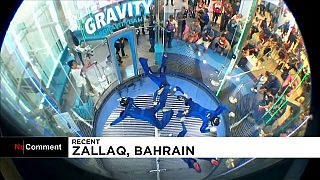 The event took place from October 25-28 in a wind tunnel in Zallaq, Bahrain and featured 240 competitors from all over the world skydiving in a variety of events.

Team France was cheered on by a large crowd as they won gold in the four-way formation skydiving.

Team Firefly Singapore also impressed with their routine inside the wind tunnel during the D2 Women's Open, while Latvia's Tom Ivans was victorious in the Solo Freestyle event.

Indoor skydiving, also known as body flight, is a sport where competitors fly about in a vertical wind tunnel performing routines either individually or in teams.