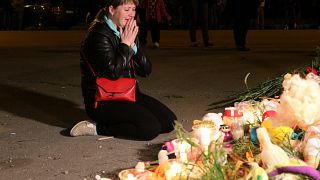 At least 19 people killed and dozens more injured in shooting

At least 19 people have been killed and dozens more injured in a shooting at a technical college in Russian-annexed Crimea.

The attack was carried out by an 18-year-old student in the city of Kerch.

Witnesses said the attack started with an explosion, followed by more blasts, and a hail of gunfire. The motive is still unclear.

Many of the victims were teenage students who suffered shrapnel and bullet wounds.

Euronews correspondent Galina Polonskaya, who was at the scene, said that the body identification process went on during the night and relatives "were going through hell" while they waited for more information.

People across Russia and Ukraine have also paid their respects to the victims at memorials.