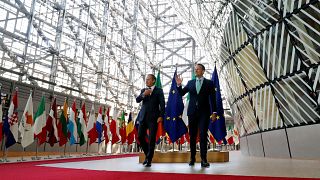 The UK's Prime Minister Theresa May has urged the EU not to allow a stand-off over issue of the Irish border to "derail" Brexit negotiations - saying she still believes a deal is "achievable".

As she prepares for crucial talks in Brussels on Wednesday, May remained upbeat about the chances of a deal, but reiterated that she will not agree to anything that "threatens the integrity" of the UK.

The most recent set of talks - between UK Brexit Secretary Dominic Raab and the EU's Michel Barnier - were abandoned after just an hour, due to disagreement over the EU's proposed 'backstop' solution to the Ireland issue.

A so-called backstop agreement would see Northern Ireland remain in the EU customs union, large parts of the single market and the EU VAT system – while the rest of the UK would leave.

Addressing the House of Commons, the Prime Minister reiterated that she will never accept a customs border that would see Northern Ireland "carved off" from the UK’s internal market.

She said if a backstop does come into force it must be a "temporary solution", and that Britain must avoid ending up in a "permanent limbo, with no new relationship between the UK and the EU ever agreed".

The PM will be hoping to reassure staunch Brexiteers within her own Conservative Party, as well as members of Northern Ireland's Democratic Unionist Party (DUP) – which props up her minority government.

In recent days, DUP leader Arlene Foster has threatened to 'paralyse' the government's domestic agenda if Northern Ireland's place in the union is jeopardised by Brexit.

Speaking exclusively to Euronews, Ireland’s Foreign Minister Simon Coveney has said he thinks a deal can be done, asserting that the agreement is already "about 90% complete".

He said Theresa May and the UK government already committed to a backstop - in March, and again in June - and that it would be "catastrophic" for the UK to crash out of the EU without a deal.

However, Coveney did express concern over the slow progress of negotiations, warning that "time is moving on."

He said: "I don't expect detailed proposals in front of leaders this week, because clearly everyone realises that the negotiators need more time.

"I think we all would like to see this concluded as soon as possible. There is pressure on now, and I hope that we can find a way of getting this concluded in November".

Meanwhile, in a letter to EU27 leaders, European Council President Donald Tusk voiced his concerns that a 'no–deal' Brexit is "more likely than ever before".

In a reference to the impasse regarding Ireland, Tusk said negotiations are proving "more complicated than some may have expected".

He said whilst there is "good will" on both sides, the EU "must prepare for a no-deal scenario".

There is less than six months to go until the deadline of the 29th of March 2019, when Britain is scheduled to exit the EU.