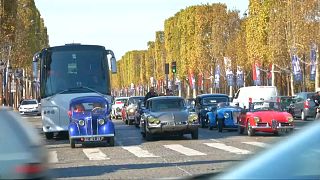 The 120th Paris Motor Show has taken place amid a cortege of around 200 vehicles.

The (mostly) French vehicles spanned more than 100 years of history, from a 1900 model by pioneering manufacturer Hurtu, to a 2017 Citroen motorcycle encased in chrome.

Also featured was a 1920s fire engine, manned by a modern-day firefighter wearing a vintage uniform.

Most of the cars were brought by members of collectors' associations including Vincennes en Anciennes — a play on the name of the Paris suburb of Vincennes — and they will compete for a "best in show" prize, voted for by the public.

After spending the morning on display on the Place de la Concorde, the cars paraded around the city, including along the banks of the River Seine, before weaving in and out of traffic on the Champs Elysees.