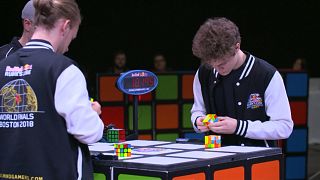 The international Rubik's Cube tournament was a culmination of qualifiers held in 12 countries over six months. Prizes were awarded in head-to-head game modes, including Speed Cubing, Fastest Hand, Re-Scramble and the first-ever female-only Speed Cubing category.

The competition welcomed Hungarian architect and professor Erno Rubik, the inventor of the Rubik's Cube.

The toy was invented in 1974 and is popular among young and old, with more than 350 million cubes sold worldwide.