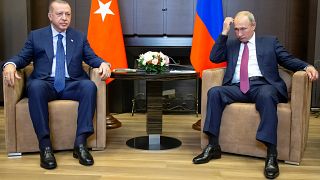 Vladimir Putin says the end of the war in Syria is in sight. The Russian President met his Turkish counterpart Recep Tayyip Erdogan yesterday and announced a "buffer zone" in Idlib provice, Syria's last rebel stronghold. For weeks, humanitarian groups have been warning about the cost of an assault on Idlib by Russian-backed government forces. UN Special Envoy for Syria Staffan de Mistura called at the end of August for a humanitarian corridor to be set up so civilians could leave before the fighting began.

Last week at a Russia-Turkey-Iran summit in Tehran, Turkish President Erdogan echoed calls for a buffer zone in the hopes of avoiding mass migration of Syrians over the Turkish border. At the time President Putin publicly refused his proposal- this time, he's said yes.

The plan is to separate government forces from the rebel fighters in the area and provide a lifeline for the over 2 million civilians living there. But it's far from certain that this is the answer humanitarian groups have been looking for.

"The devil is really in the details," said Abdy Yeganeh, Director of nonprofit organisation Independent Diplomat.

"It's still unclear what the buffer zone means, and how it will be enforced, and what are the consequences when it's not being enforced properly. The key thing is to remember, there's already been a previous agreement on Idlib, Idlib is one of the de-escalation zones agreed on by Russia. And in fact, Russia was supposed to police that de-escalation zone in Idlib and also elsewhere in Syria. And Russia along with the Syrian forces on the ground have been the main perpetrators of breaking that de-escalation zone in Idlib. So, if I was one of the three million Syrian civilians living in Idlib, I wouldn't have much confidence in this new buffer zone where it has Russia, one of the main protagonists of the conflict, enforcing it."

There may also be different expectations for what the DMZ will accomplish, according to Yeganeh. In the press conference on Monday, Erdogan stated the zone would give Turkish authorities an opportunity to focus on dealing with Kurdish forces in Syria.

"It seems as always from the start of this conflict in Syria in the last seven years, Syrian civilians are always the last to be on that agenda," said Yeganeh. "Will this buffer zone be the answer to the Syrian crisis, I'm very skeptical. What it instead needs is a comprehensive approach that provides protection for the civilians in Idlib and across Syria. And that's been the key missing link."