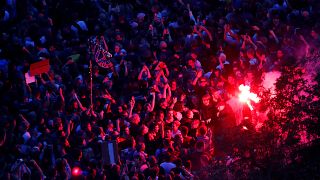 A German town that's been rocked by far-right protests welcomed a different kind of rock last night—the musical kind. Chemnitz hosted a "rock against racism" concert that saw around 65,000 people attend an open-air event with live music and a peaceful protest. It was billed as a response to the weeks of violence between far-right groups and counter-protesters in the city, which began after the murder of a German-Cuban man last month. The man, identified as Daniel H., was knifed in the street and two men have been arrested. They are allegedly of Iraqi and Syrian origin. The concert began with a moment of silence for Daniel H.

The free concert was supposed to be held by a statue of Karl Marx in town, but organizers changed the venue to accommodate larger than expected crowds. Many Germans travelled from other cities to attend.

"The sad thing is that with events like this, there are a lot of people, but when it comes to really showing that you are against the far-right, then there will be nobody," said a woman who attended the show. "It's a free concert, so there are thousands of people here now."

Some hoped the event could help rehabilitate Chemnitz's international image after a month of news coverage of far-right demonstrations.

"We are not a far-right city," said local Peter Engelmann. "The majority of the population is totally normal, democratically civilised but not far-right. For God's sake, we don't want that. We don't want such people."

The event was organized under the motto #wirsindmehr, "there are more of us," in a bid for unity. Last Monday, Chancellor Angela Merkel encouraged Germans to mobilise against hate.

“These people who march and are prone to violence – some have also shamelessly shown their closeness to Nazism – they stand neither for Chemnitz nor for Saxony overall, nor are they ‘the people’,” said Merkel's spokesman, Steffen Seibert.

Merkel referenced a popular slogan amongst far-right groups in Germany that's been used often in Chemnitz- "we the people," a phrase last used at the end of the communist East German regime.

Anti-migrant sentiment has been on the rise in Germany since Angela Merkel famously welcomed migrants at the height of the refugee crisis in 2015, saying, "We'll manage it" in a press conference after visiting a Dresden migrant center. In the 2017 federal elections, anti-migrant party Alternative for Germany won a stunning 94 seats in the Bundestag, making it the largest opposition party in the country. The party's political base is largely in Eastern Germany.