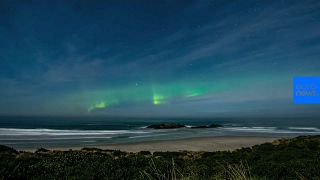 The aurora was captured on camera by Brad Phipps at Smalls Beach near Dunedin on the southeast coast of New Zealand.

Shimmering shades of green and blue illuminated off the waves.

The natural phenomenon was also spotted on the east coast of Tasmania, Australia.

The aurora australis occur in the southern hemisphere when particles from a solar flare interact with Earth's magnetic field.

When the atoms collide, electromagnetic energy is released in the form of light.