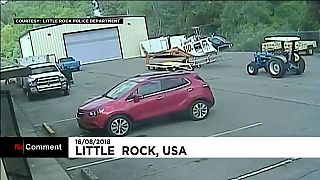 The pilot of the helicopter, a retired police officer, was seriously injured when the accident occurred on August 16.

Released surveillance footage of the incident shows the helicopter rising unsteadily, before tilting, and snapping its propellors off the pavement before crashing.

Pilot William Denio is said to have sustained a head injury but is in a stable condition, according to local reports.

Severe winds are thought to have caused the accident.