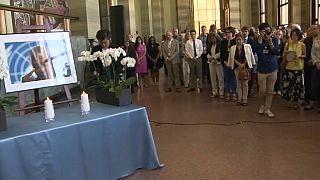 The United Nations (UN) paid tribute to the late Kofi Annan on Monday.

The UN flag flew half-mast outside the organisations' headquarters in New York and Geneva.

UN Secretary-General, Antonio Guterres, released a statement honouring his late predecessor and Nobel Peace Prize laureate who died in Bern, Switzerland on August 18 at the age of 80.

Guterres said that “in many ways, Kofi Annan was the United Nations. He rose through the ranks to lead the organisation into the new millennium with matchless dignity and determination.”

Annan became Secretary-General in 1997, a post he held for nine years, through the Rwanda genocide crisis in the 1990's and unrest in Cyprus. He staunchly opposed the US-led invasion of Iraq in 2003 and served as the first UN envoy at the start of the Syrian war.