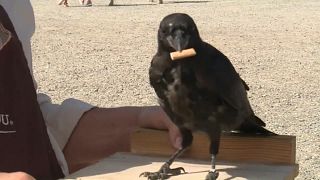 Six crows have been specially trained to collect cigarette butts at the French theme park Puy du Fou this week.

The president of the theme park, Nicolas de Villiers referred to the project as an "educational activity," and said that although the park is very clean, he hopes that the enterprise will draw attention to the need of looking after the environment.

Speaking to AFP, de Villiers said that the idea was born many years ago by one of the park's falconers.

Bird specialist Christophe Gaborit created a reward-based system where the crow can lay a cigarette butt on one side of the box. A mechanism is then triggered, delivering a kibble to the bird.

Motivated by a reward, the birds quickly understood the concept. De Villiers said that the crows are "very fast" and can fill a box in under 45 minutes.