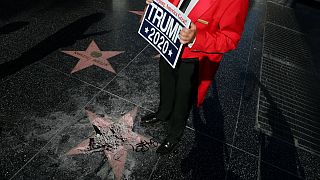 A man with a pickax vandalised US President Donald Trump's star on the Hollywood Walk of Fameon Wednesday and later surrendered to police, a spokesman for the Los Angeles Police Department said.

As pedestrians walked by the site, a man stood by with a "Trump 2020" sign, saying he was protecting it from further damage.

Installed in 2007, Trump's star has been frequently vandalised since he was elected as president in 2016.