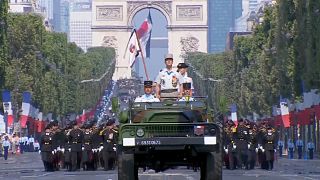 Fighter planes flew over Paris and thousands of troops paraded down the Champs-Elysees as France celebrated Bastille Day on Saturday.

On the eve of the parade, Macron signed a new military budget, aimed at lifting defence spending to two percent of gross domestic product, as promised to NATO.

The rise had long been planned but came after a contentious NATO summit in which President Donald Trump assailed allies for not spending enough on defence.